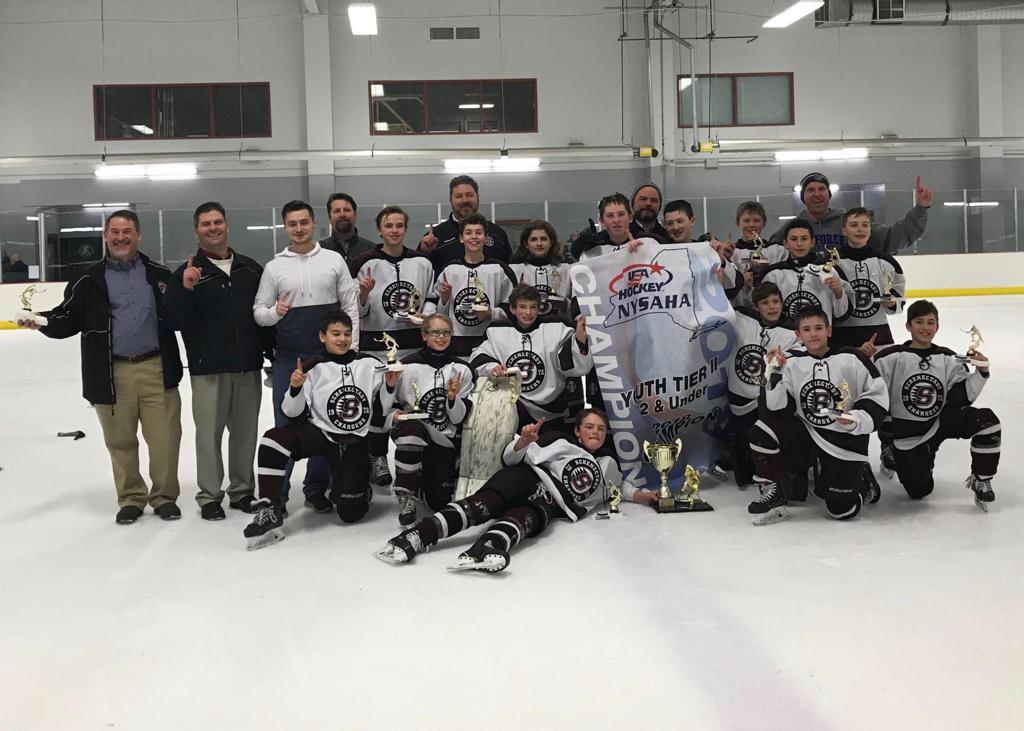 SCHENECTADY — The Schenectady Chargers found themselves down a goal in their semifinal hockey game of the state championship tournament over the weekend in Buffalo.

They'd been in similar spots before and rallied. They rallied again.

"Because they were a pretty good team they didn't find themselves behind too often early in the season," Chargers head coach Wally Bzdell said. "Then when we were, there was some hesitation. We developed that skill to stick with it and stay together."

Schenectady won that semifinal game 5-2 over the Southtowns Stars of Buffalo, and followed with a 6-2 victory over the Syracuse Valley Eagles to claim the New York State Tier II 12U title.

That last triumph left the Chargers with 47-10-4 overall record and a No. 7 national rank among 1,374 12U teams by Myhockeyrankings.com.

"The kids were getting outplayed," Chargers assistant coach Kevin Magaletta said of that semifinal game at the Northtown Center in Amherst. "They turned it on. They scored three goals in the second period."

Schenectady, consisting of players from several Capital Region schools and representing the Schenectady Youth Hockey Association, went 3-0 in its pool before completing its season with two more wins and the state title.

"It was pretty exciting," Magaletta said. "A rare feat, for sure."

Schenectady reached the state tournament with a 3-0 record at the New York Northern Zone Sectional Tournament which it hosted at the Schenectady County Recreational Facility in Glenville. Schenectady defeated the Massena Red Raiders, the St. Lawrence Storm and the Adirondack Thunder from Queensbury.

"We put a lot of focus on doing details of the game well. The small details," said Bzdell, a sports psychologist from Scotia. "Be relentless in the back check. Have your stick in the right direction. Talk on the ice. Know what role you have on the faceoff. Recognize game situations."

The Chargers piled up 385 goals and surrendered 92, and while they were involved in some one-sided games, they pulled out some close ones, too.

"They learned that if you're behind and fearful and nervous, that's natural, but you can still have a positive outcome," Bzdell said.

The Chargers began their long season in early September and it included several trips out of the Capital Region.

"The parents did all the right things and did a great job of representing our organization," Bzdell said. "The kids did all of the right things. I got  a lot of comments about that, how well our kids were."